Mark and Nic Cycle to the South Coast – Part 1 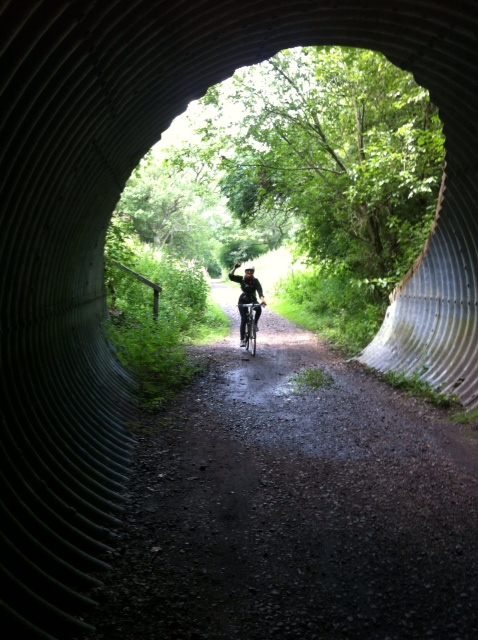 Why you may ask? Well we don’t really know the answer to that question either. I think the best we have come up with is ‘just because!’ I suppose we could compare ourselves to those mountain climbers who, when questioned about the reason for attempting to scale some enormous peak, reply ‘because it’s there,’ but whatever the reason, we thought it would be fun and also provide me with something to write about for this blog.

So we settled on a date – Friday 3rd August. Beyond that very little time was spent planning – at least on Nic’s part anyway! I, meanwhile, researched a number of different routes, looking at the obvious London to Brighton options before stumbling across the Downslink Cycle Way on the Sustrans website. Sustrans is a charitable organisation that manages and maintains cycle paths across the country and their website is a great resource for cyclists providing information a whole network of routes across London and throughout the UK.

The Downslink Cycleway is a bridle path that follows the route of a disused railway from Guildford all the way to Shoreham by Sea. ‘Perfect,’ I thought! It starts about 5 miles from my house in Woking. Not just that but the route is traffic free 95% of the way and because it follows an old railway line it is predominantly flat.

So with the route chosen, the date set and both bikes serviced a couple of days before, we were ready for action and headed to mine on Thursday evening. After much discussion about what to eat the night before a big cycle, considering the best type of fuel for such an event, carb loading and energy expenditure we got fed up and just ordered a curry!

True to form Nic asked me that night ‘so do we need a map tomorrow?’ Myself, in usual nerd fashion, had already laid out everything ready for my bag including:- 3 maps; a compass; a GPS watch; tyre levers; spare inner tubes; a tool kit; bicycle pump; and a cuddly toy!

After a good night’s sleep and Nic’s obsession with eggs satisfied we set off at 8:30am from Woking with the weather looking favourable and headed out towards Guildford through the quiet country lanes of Sutton Green and via Burpham. Out of curiosity we had both decided to wear Ki Fit Armbands to measure our calorie expenditure on the day and I was also wearing my Garmin Forerunner watch, which proved to be very addictive. 5 minutes in and we had already covered 1.3miles and hit a top speed of 31mph. ‘We’ll be there by noon!’ I recall us saying at 8:35am! Don’t you just love downhill! 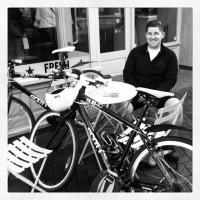 Mark at Pret in Guildford

We arrived in Guildford at 9am and headed straight to Pret a Manger – where else! A quick pit stop for coffee and off we went to find the start point of the route. To begin with we found ourselves cycling along the tow path of the Basingstoke canal and, whilst this was very picturesque, wasn’t the ideal surface for the hybrid bikes we were on. So with an idea of the direction we were headed we picked up the main road for a couple of minutes and then found a signpost for the  number 22 National Cycle Route in Shalford.

Within seconds we were flying along a beautiful wide cycle path and making good progress. The signposts were very easy to follow, the weather was dry and bright and the scenery was stunning. As we passed through the first of a number of disused stations on the route at Bramley I decided to take on a bit more protein and promptly swallowed a fly! I think I emptied about half of the 2 litre hydration bladder I was carrying in my rucksack in one go!

Shortly after that we hit our first steep hill of the day at 10:00am. Nothing major but enough to get the heart rate up. The Ki Fit shows me burning 13.5 Kcal/min at the hardest point of the climb with Nicola registering 6.5 Kcal/min – must be my heavier rucksack!! 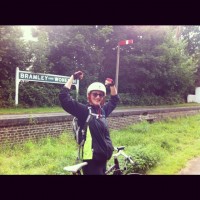 Nic at Bramley and Wonnersh Station

Then, as I was reaching the top of the hill, I felt my back tyre go a bit flat. So, as I waited for Nicola, I grabbed the pump out and added some air hoping that it was just a slow leak. 2 bends later and it was fairly obvious that it was a full puncture and then, as I pulled up at the side of the road in someone’s driveway, the first rain of the day came.

20 minutes later, with a new inner tube in, we were off again. For the next hour we comfortably pushed along at a steady speed of 15mph but then I started to get a nagging feeling. Shouldn’t we be in Cranleigh by now? When we reached a T-junction I noticed the signpost for the 22 cycle path that we had been following was also signposted for Shere, Gomshall and Dorking – completely the wrong way.

At some point the 22 had crossed the 222 Downslink cycle path and we had missed it. Fortunately the signpost in the other direction was for Cranleigh – 6 miles. I knew the path we were meant to be following went through Cranleigh and so we turned right knowing we had taken a detour. Cue 6 miles of steep undulating slog, albeit through the beautiful Surry hills. Nicola certainly did not enjoy that bit and you can see she hit her highest expenditure rate of the day at 11:43am with 9.5 Kcal/min.

We also saw a few peaks and troughs on my data around this time as I waited for Nic to catch up at the top of a few hills. It was all worth it though as we shot down a massive downhill into Cranleigh, hitting our top speed of 33.5mph for the day with Nic shouting ‘Weeeeeeeeeee’ all the way down.

We reached Cranleigh at midday and stopped for a well earned lunch at the Cromwell Coffee House. I made a quick phone to call my other half Natalie who had arranged to meet us at the end in Shoreham to pick us up.

Natalie – ‘I’m in Shoreham where are you?’

Feeling rested and refreshed we headed off at 1pm, this time on the right path, knowing we needed to pick up the pace a bit and this time knowing with absolute certainty that we would not be there by noon!