Mark and Nic Cycle to the South Coast – Part 2 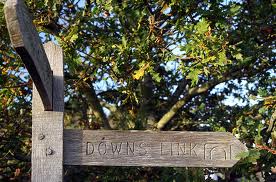 As we headed out of Cranleigh we found ourselves on an embankment and although it was flat and wide, it was a bit muddy in places. I certainly felt my back wheel slip a couple of times. Not ideal terrain for the slick road tyres on our bikes. Then shortly after that the route became even worse and after a couple of steep inclines on sandy, rocky ground I looked at Nic and thought if it stays like this we’ll be lucky to get there before it goes dark!

Knowing that we were already a bit behind schedule we agreed that if the path didn’t improve we would need to get the maps out and find a new route on the road!

So we trudged on a bit further and fortunately the path became much better. Soon we found ourselves cruising along at a comfortable 12.5mph. The next hour and a half were fairly uneventful, although the scenery was stunning, and we covered a good amount of ground.

Sensing that I wouldn’t have much to write about for this section, Nic decided to introduce a bit of stunt biking and promptly stacked it as we came down a short incline! It’s a good job there were 3 young kids standing with their mum at that exact point to see it otherwise it would have been wasted. As it was they awarded her 5.9’s all round.

Thankfully no damage was done, oh and Nic was ok too with perhaps just a bruised bum the next day to show for it.

Soon after, we reached West Grinstead station, another disused stop along the Downslink route. We had covered 20 miles in less than 2 hours since lunch and now had 46 miles under our belts. At this point Nic recalled my sage like advice from the previous night to ‘go commando to reduce saddle sore’ and disappeared behind a bush. She emerged looking unconvinced but obviously prepared to give it a go!

At about 3:00pm we stopped for a quick pit stop, tucking into the home-made scones with jam that I had picked up from the coffee shop in Cranleigh. We were in a little village called Henfield and calculated that we only had about 7 or 8 miles left to cover.

We set off again at 3:15pm with the end in sight, not expecting that the next 3 miles would be a stony track through farm land. Our hands and wrists were crying out for front suspension at this point and it slowed our progress a little. Then we emerged at Bramber Castle to see our first sign post for Shoreham and I heard a little cheer from behind!

The last 4 or 5 miles into Shoreham were not very pleasant. Feeling quite tired at this point neither of us enjoyed the busy traffic of the A283 Shoreham Road thundering past as we wobbled along. So we gritted our teeth, Nic tucked in on my back wheel and we rolled into Shoreham at 4:00pm on the dot. 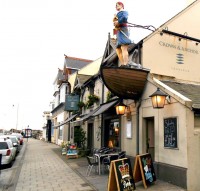 We then spent about 20 minutes cycling through a rather dull residential area trying to find the beach before realising that the road went round in a loop on a little headland. There was only one thing for it! 10 minutes later we had sacked the beach idea off and were sat outside The Crown & Anchor Public House on Shoreham high street enjoying a very well deserved pint.

And the scores on the doors:

Must have been the rucksack!